Crossing the Line by Karla Doyle 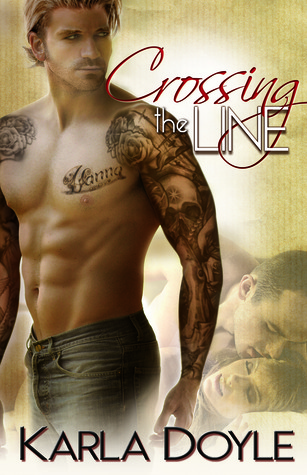 Crossing the Line
by Karla Doyle

Lifelong best friends Derrick and Jeremy met Hanna at a bar ten years ago. Both wanted her-one married her. Now the other man has been invited to join in for one hot weekend.

Everything would’ve been fine if they’d had their fun that weekend, then gone back to normal. But they didn’t. And when past demons resurface, things will never be the same-for any of them.

Crossing the Line is a dark contemporary romance that contains explicit sex and mature situations.

Crossing the Line is a story of undying lone and passion that is so hot, someone is bound to get burned. This book is a cautionary tale of what can go terribly wrong when an innocent night of fun turns out horribly wrong. This my friends is why a menage can be so dangerous. When its hot, it is SO HOT, but when it goes wrong, it can be disastrous.

Hanna and Derrick are married and madly in love. Derrick is a bad boy mechanic and Hanna is a teacher.

They met one night a long time ago and they have off the charts chemistry.

Hanna has fantasies. She dreams of a menage. So Derrick agrees to give her the birthday she will never forget. They go off to a resort and invite Derrick’s best friend Jeremy. He is allowed to participate and pleasure Hanna.

They have a night of passion that Hanna will never forget. Derrick begins to feel insecurities. He has said from day one that he does not want to have children. He comes from a messed up family. Hanna wants children, but she is willing to give up that dream to have the man she loves. Derrick’s father was an alcoholic who was abusive. He knows that he is damaged.

Derrick sees Hanna and he knows that he’s not good enough for her. He sees his friend Jeremy, an accomplished man with a perfect past, and he sees someone who could make Hanna happy. So he does what he thinks is best for her.

While Jeremy could give Hanna children, she doesn’t love him. Derrick is the man of her dreams in all ways except one. He refuses to have children because of his fear of being like his father. Hanna is left reeling by Derrick and his choices to push her away.

This book quickly devolves into a hot mess. Derrick is not a great communicator to begin with, and then he just goes plain crazy. He starts taking his anger out on Hanna. Jeremy is there for Hanna and quickly swoops in to pick up the pieces. This only further infuriates Derrick proving in his mind that Hanna doesn’t belong with him.

This one was quite messy and quite emotional. I had no idea how it was going to turn out and quite frankly wasn’t sure I could forgive Derrick. He was a total jerk. I wont tell you what happens and give it away, but in the end, you get a satisfying result. It is not my version of how I wanted things to go, but it wrapped up nicely.

This book has a steamy hot start,  an emotional wreck in the middle with a tidy ending. If you like the steam and the angst, than you will probably enjoy this one. I give it four stars instead of five, mainly because of Derrick. I didn’t get some of what he did. Hanna also kind of got on my nerves.  She was a bit of a doormat. This one is told from multiple points of view. Four stars for me.

I am a thirty something wife and mother of two. I read in all of my free time. I can't remember the last time I chose to watch television. I would prefer reading or hanging out online24/7 but one must pay the bills, thus my day job. I like UF but lately have been exploring more erotica and adult romance novels. I love a good Alpha male and I am not afraid of the dark stuff. I like historical romance as well. Sometimes I go for the YA stuff. I'm a sap for a good love story. I prefer a HEA (insert unicorns, rainbows and kittens). Genres I will read: Contemporary Romance and some Historical Romance, Erotica, Urban Fantasy, Young Adult, and Paranormal Romance.
View all posts by Reading Haven →
Image | This entry was posted in 2014, 4 Stars, Contemporary Romance, Erotica and tagged Contemporary Romance, Crossing The Line, Erotic Romance, Karla Doyle, Menage. Bookmark the permalink.

1 Response to Crossing the Line by Karla Doyle