The Professional, by Kresley Cole 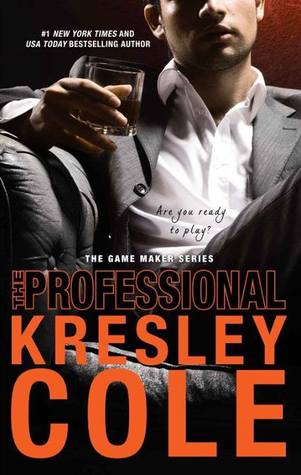 The highly anticipated complete novel of The Professional—the first installment in #1 New York Times bestselling author Kresley Cole’s scorching Game Maker series, an erotica collection that has readers asking: How hot is too hot?He makes the rules…Mafiya enforcer Aleksei “The Siberian” Sevastyan’s loyalty to his boss knows no bounds, until he meets the boss’s long-lost daughter, a curvy, feisty redhead who haunts his mind and heats his blood like no other. Ordered to protect her, Aleksei will do anything to possess her as well—on his own wicked terms.Rules are made to be broken…Grad student Natalie Porter had barely recovered from her first sight of the dark and breathtaking Sevastyan before the professional enforcer whisks her away to Russia, thrusting her into a world of extreme wealth and wanton pleasures. Every day under his protection leads her deeper under his masterful spell.Are you ready to play?Yet all is not as it seems. To remove Natalie from an enemy’s reach, Sevastyan spirits her into hiding. From an opulent palace in Russia to the decadent playgrounds of the mega-wealthy in Paris, the two lovers will discover that even their darkest—and most forbidden—fantasies can come true…

Alexandr Sevastyan (pronounced Sebastian with a v) is a Russian Mafia Enforcer.         He’s also a dirty talking Alpha. Sex on a stick!!

Alexander lives a life of extremes. Extreme violence, loyalty, and vigilance. Sevastyan is sent to Nebraska to locate and protect his boss’ daughter but he is not prepared for what he feels upon seeing her. He becomes obsessed with possessing her and making her his. But he knows such a move would be disloyal to his boss and adoptive father.

“Was I just a job to you, Savastyan?”
He gazed to the right of me as he answered, “That’s all you can be.”
“Do you wish you’d never been sent to America for me?” He faced me fully.
“Every second of the day,”

The Russian mob has it’s own secret code. Where every tattoo has a meaning. Sevastyan is covered in ink. Eight sided stars on each knees symbolizing that he kneels to no one. Stars on his chest, and tattoos on his fingers. His body is a delicious road map of ink and muscle. This man does not apologize for who he is and what he does.

Natalie Porter is a hard working grad student in Nebraska. She has been trying to locate her biological parents for some time by working her ass off in order to pay for investigators.

Natalie is also a sexy redhead with a body that turns heads. She’s feisty and forward thinking, so when she spots the “hot as sin” Russian in her locale bar, she makes a move. Dressed in expensive threads, with tattoos peeking out from under his crisp shirt, Alexandr is an puzzle that Natalie must solve. The immediate chemistry between these two is off the charts.

Sevastyan has sworn to protect Natalie with his life. But who will protect her from his dark desire to own, possess, and collar her.

“This need I have for you…it should unsettle you.”

“What do you want from me?”
I gasped when he fisted the collar of my dampened shirt. “I want what’s mine.” He tore the material from me with one rip, stripping me.

Sebastyan desires Natalie sexually. But can he give her more than just physical pleasure. I mean eventually, even multiple orgasms get old and women start looking for emotional security and late night pillow talks. Unfortunately, Sabastyan has lived a graphically violent life, devoid of love and affection. He has had to fight for everything he owns, and has never dated let alone been in a relationship. Oh the angst, as Natalie attempts to chip away at the rough exterior of a man who claims he can not live without her. She only wants him to open up to her.

“He curled his finger under my chin, all tenderness, even as he said, “How could I close you out when I never let you in?”

Oh.My.Gah!!! Who is he trying to fool? His heart belonged to her at first site. I loved experiencing these two falling in love. They were inevitable! Cosmic! Epic!The Professional is a fast paced, erotic adventure that travels the globe from the corn fields of Nebraska to Russia. Introducing the reader to the violent underworld of the Russian Mafia. The cars, jets, palaces, and wealth are obscene. Manipulation and deceit run rampant and no one can be trusted as a turf war ensues. I loved the characters and the world building. As soon as I finished reading this book, I found myself back on page one doing an immediate re-read. Crazy right?!!! Crazy Good is what this book is.The Epilogue was a sweet tease.

Oh, and I am IN LOVE with Savastyan’s brother, Maksimilain, and I only met him once. I hope he is the star of book two, which I am already jonesing to read!!!