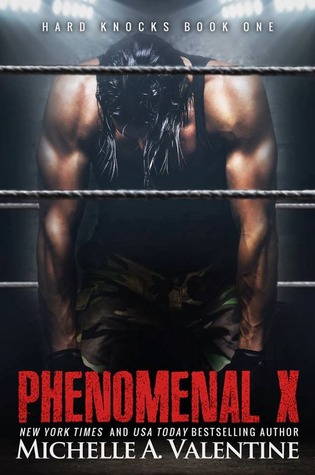 From the mean streets of Detroit rises the newest superstar of professional wrestling, Xavier Cold, better known as Phenomenal X. His muscular physique makes men cower before him and women lose their minds with desire.

Anna Cortez is fresh out of college and naive to the harsh realities of the real world. Tired of living under the thumb of her conservative family, she defies them when she accepts a job as the assistant to wrestling’s most notorious bad-boy. Phenomenal X has an animalistic nature that even good girl Anna finds hard to resist.

One night forced to share a bed in a sold-out hotel, lines blur between them and they quickly learn that one lustful night changes everything and neither one of them will ever be the same. I am torn on how to review this book. There were times when I wanted to laugh at the loosely put together plot and the in-genuine responses. I had to wipe the drool off my chin during the alpha male dominance displays. I found myself genuinely liking this book despite all of its flaws. This is a definite good girl meets bad boy book. She is immediately drawn to him and he pushes her away because he will never be “good enough” for her.

Anna falls hard and fast and despite her sexual inexperience, they have frequent unprotected sex. He is barbaric and feral.

He has a very bad temper…

And he is strangely aloof.

But when someone threatens what is his, he will destroy them. Despite this cliché of a plot, I read this one cover to cover. I didn’t care much for Anna and I was a little annoyed with her at times. Xavier was a slightly more complex character… Overall, I am giving this one three stars. This is a short review because there are a million other reviews out there and quite frankly, this one was just “ok” for me. The sex was hot, the build up was good. There is a big old Cliffhanger at the end so be prepared for that! I will definitely read the next book. Not because the writing was so good, not because I love the characters but because I want to know what the heck happens.

The average rating on this one is in the high three range, I would give it a low three myself. But to each his own. Xavier is pretty hot but with all the WTF moments, I couldn’t bring myself to go higher.

I am a thirty something wife and mother of two. I read in all of my free time. I can't remember the last time I chose to watch television. I would prefer reading or hanging out online24/7 but one must pay the bills, thus my day job. I like UF but lately have been exploring more erotica and adult romance novels. I love a good Alpha male and I am not afraid of the dark stuff. I like historical romance as well. Sometimes I go for the YA stuff. I'm a sap for a good love story. I prefer a HEA (insert unicorns, rainbows and kittens). Genres I will read: Contemporary Romance and some Historical Romance, Erotica, Urban Fantasy, Young Adult, and Paranormal Romance.
View all posts by Reading Haven →
Image | This entry was posted in 2014, 4 Stars, Contemporary Romance, Heather's reviews and tagged Contemporary Romance, Hard Knocks #1, Michelle A. Valentine, Phenomenal X, Sports Romance. Bookmark the permalink.