Jessica Sorensen is the author of The New York Times and USA Today Bestsellers, The Secret of Ella and Micha, The Coincidence of Callie and Kayden, and Breaking Nova, which are New Adult Contemporary novels. She also writes Paranormal series, including the Fallen Star Series, Shattered Promises, Darkness Falls, and the Death Collectors. She loves writing and reading and is an avid watcher of TV series The Vampire Diaries and Modern Family. An immense music lover, Jessica immerses herself in her music as she writes. She has a broad taste in music, and a list of favorite songs that goes on for miles! A few of her current favorite bands are Chevelle, Rise Against, Alkaline Trio, Brand New, Death Cab for Cutie, Flight 409, and Nirvana. Some of Jessica’s favorite “watch it over, and over again” movies include Anywhere but Here, Juno, Pride and Prejudice, The Hangover, and Bad Teacher.

About Tessa: Thank you for your interest in my books! I’m Tessa and I live in the crazy, loud, overcrowded borough of Brooklyn, New York. I love it here. This city is a constant source of inspiration, which is why I’ve decided to set my most recent books in the Line of Duty Series here.

I moved to New York when I was eighteen, the day after I graduated high school. Threw my suitcase in the back of a Chevrolet Cavalier and drove across the country to find my adventure. I’m still finding it, little by little. Thank you for being a part of it. 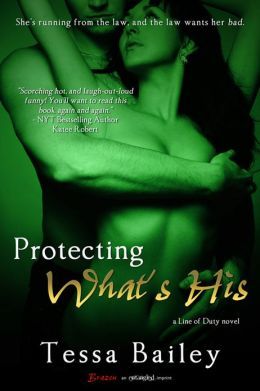 Protecting What’s His (Line of Duty #1)
by Tessa Bailey

She’s running from the law, and the law wants her bad.

The opportunity was just too damn delicious for Ginger Peet to pass up. The purse full of money she finds—$50,000 to be exact—could give her and her teen sister the new start they need. So she grabs the cash, her gothy sibling, and their life-sized statue of Dolly Parton, and blows outta Nashville in a cloud of dust. Chicago, here we come…

Turns out, Chicago has some pretty hot cops. Hot, intense, naughty-lookin’ cops like Derek Tyler, who looks like he could eat a girl up and leave her begging for more. And more. Tempting as he is, getting involved with the sexy homicide lieutenant next door poses a teensy problem for a gal who’s on the lam. But one thing is certain—Derek’s onto her, and he wants more than just a taste.

And as far as he’s concerned, possession is nine-tenths of the law. 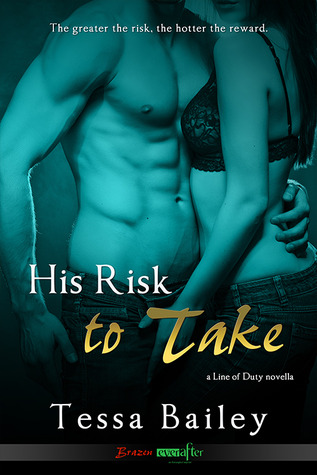 His Risk to Take (Line of Duty #2)
by Tessa Bailey

The greater the risk, the hotter the reward…

Homicide cop Troy Bennett had a reputation on the Chicago PD for being fearless and in control—until the night his daredevil partner is killed during a raid. From that moment on, he swears he’ll never again be responsible for the loss of a loved one. To escape his demons, Troy transfers to the NYPD, bringing him up close and personal with Ruby Elliott, a beautiful, street-savvy pool hustler.

Reckless and stubbornly independent, Ruby embodies everything Troy’s avoiding, but when she walks into O’Hanlon’s Pub and blows his carefully laid plans to hell, Troy knows he has to have her—risks be damned. But there’s a connection between Ruby’s shadowed past and a case Troy’s working involving a notorious Brooklyn felon, throwing her safety into jeopardy. Confronted with his biggest fear, will Troy push Ruby away to keep her safe or fight to keep her in his arms where she belongs? 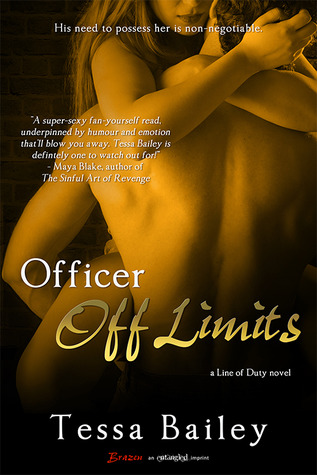 Officer Off Limits (Line of Duty #3)
by Tessa Bailey
His need to possess her is non-negotiable.

Story Brooks’ fiancé just called off their wedding two weeks before the happy day. As if that isn’t bad enough, her semi-estranged father, an infamous NYPD hostage negotiator, has suffered a heart attack. Not wanting to examine her lack of emotion over the broken engagement, she hops on a plane to reconnect with her father before it’s too late.

Playboy hostage negotiator Daniel Chase has never, not once, been refused by a woman, so when a debate over hospital snack foods with a delectable kindergarten teacher ends in flat-out rejection, he makes it his mission to seduce her. His only obstacle? She’s the daughter of his mentor who implicitly forbade Daniel from pursuing her.

Despite her father’s warnings and Daniel’s troubled past, Daniel and Story can’t resist their intense attraction to one another. But when the reason for her fiancé’s abrupt wedding cancellation comes to light, can Story and Daniel’s already forbidden relationship survive? 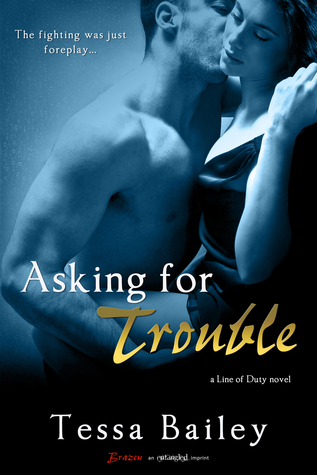 Asking for Trouble (Line of Duty #4)
by Tessa Bailey

Brent Mason and Hayden Winstead can’t stand each other. She plans exclusive parties for her rich familys charities. He’s a rough and tumble cop who rigs explosives for a living. Could two people be any less suited for conversation? They think not and prefer to keep it that way.

Unfortunately, their two best friends are deeply, disgustingly in love. Forced together, the mutual attraction simmering beneath the surface of Brent and Hayden’s non-relationship grows with every argument until it explodes into a scintillating night of mind-blowing sex. And it wont be the last, as far as Brent’s concerned.

Hayden has a secret, though. Her father’s company is relying on a merger to save them from financial ruin, and only Hayden’s marriage to the CEOs wealthy son can secure the deal. If she’s to protect her family, she’ll have to forget Brent. And he has no intention of being forgotten.